As springtime bloomed across Indiana University in 1908, an Indiana Daily Student reporter eagerly previewed an upcoming campus event. “Dainty maids in the picturesque garb of the English peasant or the flaxen-haired Norwegian will dance the complex, but graceful folk dances of long ago.” Who were these “dainty maids” and what was this dazzling-sounding spectacle? The new Indiana University May Festival collection (C693) at the University Archives tells us a history of a vernal campus tradition. Importantly, the Indiana University May Festival became an active space for female student participation in the early twentieth century. 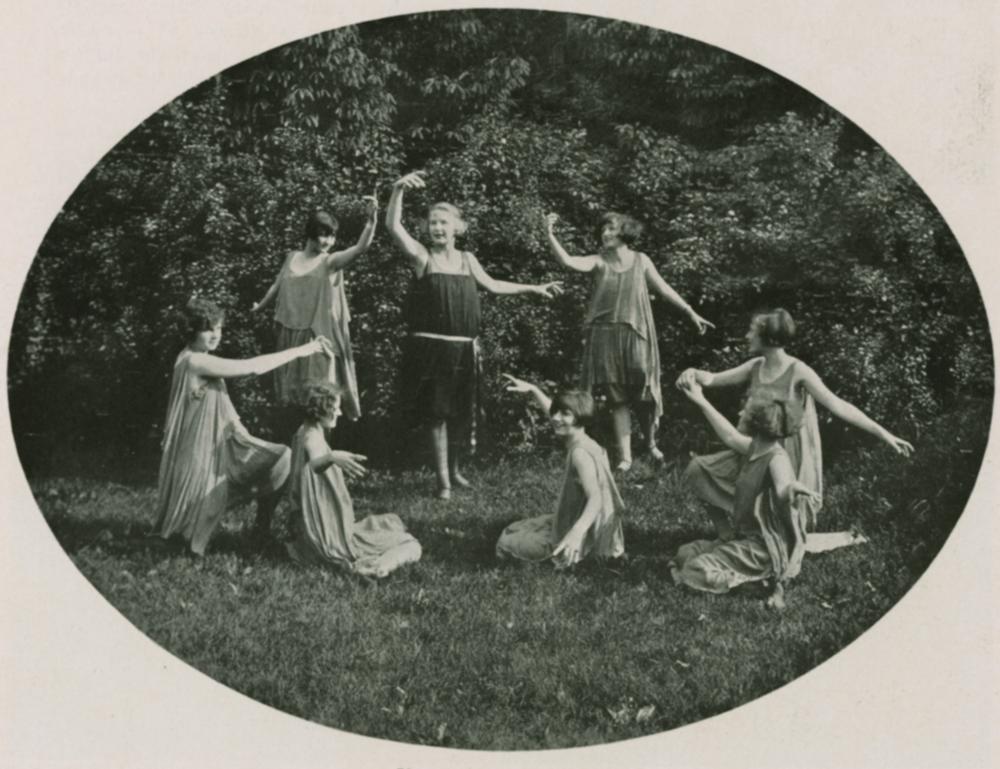 The IU May Festival began in earnest in 1905, when the IU Lecture Association organized an event featuring orchestral and choral performances in the Men’s Gymnasium. A cantata rendition of “The Swan and the Skylark” and ballet music from Faust evoked a springtime feeling. Despite glowing reviews, the IULA-hosted May Festival suffered from poor student participation. An Indiana Daily Student reporter expressed disappointment in 1906: “The small attendance is inconceivable. If the singers of Bloomington and the University knew what the chorus is doing, there would be a regular attendance of 200 instead of 30 or 40.” The event satisfied a Bloomington audience, but didn’t impact enough IU students at the time. 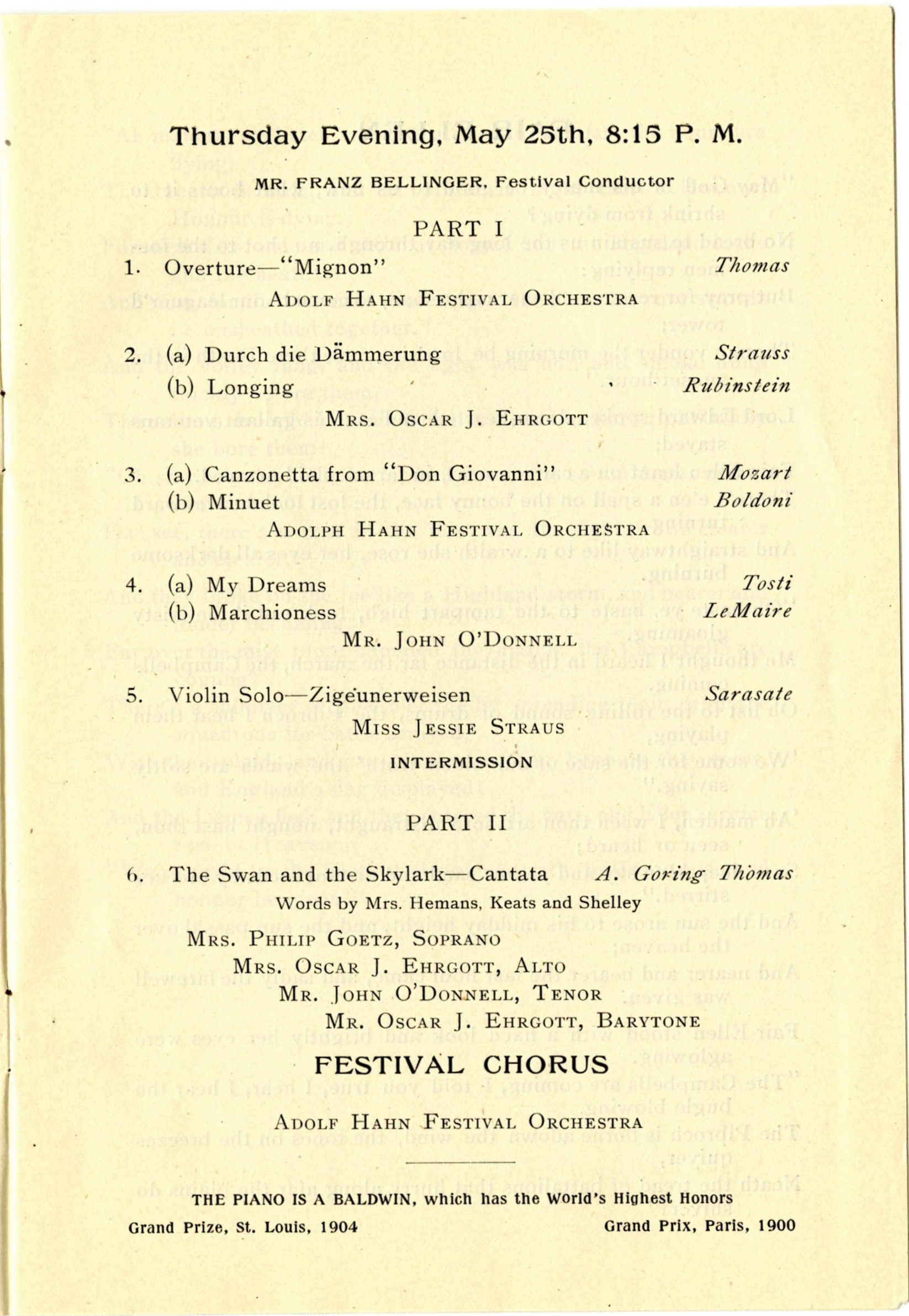 Section of the program for the 1905 May Festival, IU Archives C693

Beginning in 1908, the Women’s Athletic Association and Department of Physical Education for Women hosted the event in the Women’s Gymnasium for an invitation-only audience. Female students demonstrated exercises like dumbbell handling and club-swinging “with all the vigor and skill of their brothers,” as an IDS reporter noted. In the afternoon, they transformed into “dainty maids” to dance and wind cream and crimson streamers around a tall May Pole. Interestingly, the IDS also notes that only a small number of male students received invitations to the 1908 event.

This iteration of the May Festival was a staple of campus life by the 1920s. By 1922, the Women’s Self-Government Association (WSGA) sponsored an integral feature of the event: the election and crowning of a May Queen. The 1924 May Festival program names Mildred Wight as May Queen, with her heralds Ethel Budrow and Dorothy Tousley. Following a procession with flower girls, crown bearers, maids of honor, and other attendants, “The newly crowned May Queen is entertained by the joyous peasants.” IU students in pastoral garb performed six folk dances for the May Queen, followed by the mythical dance program “Fantasy of Dusk and Dawn.” The programs in this collection show how the all-female May Festival committee staged a mythological renaissance for modern day Bloomington. 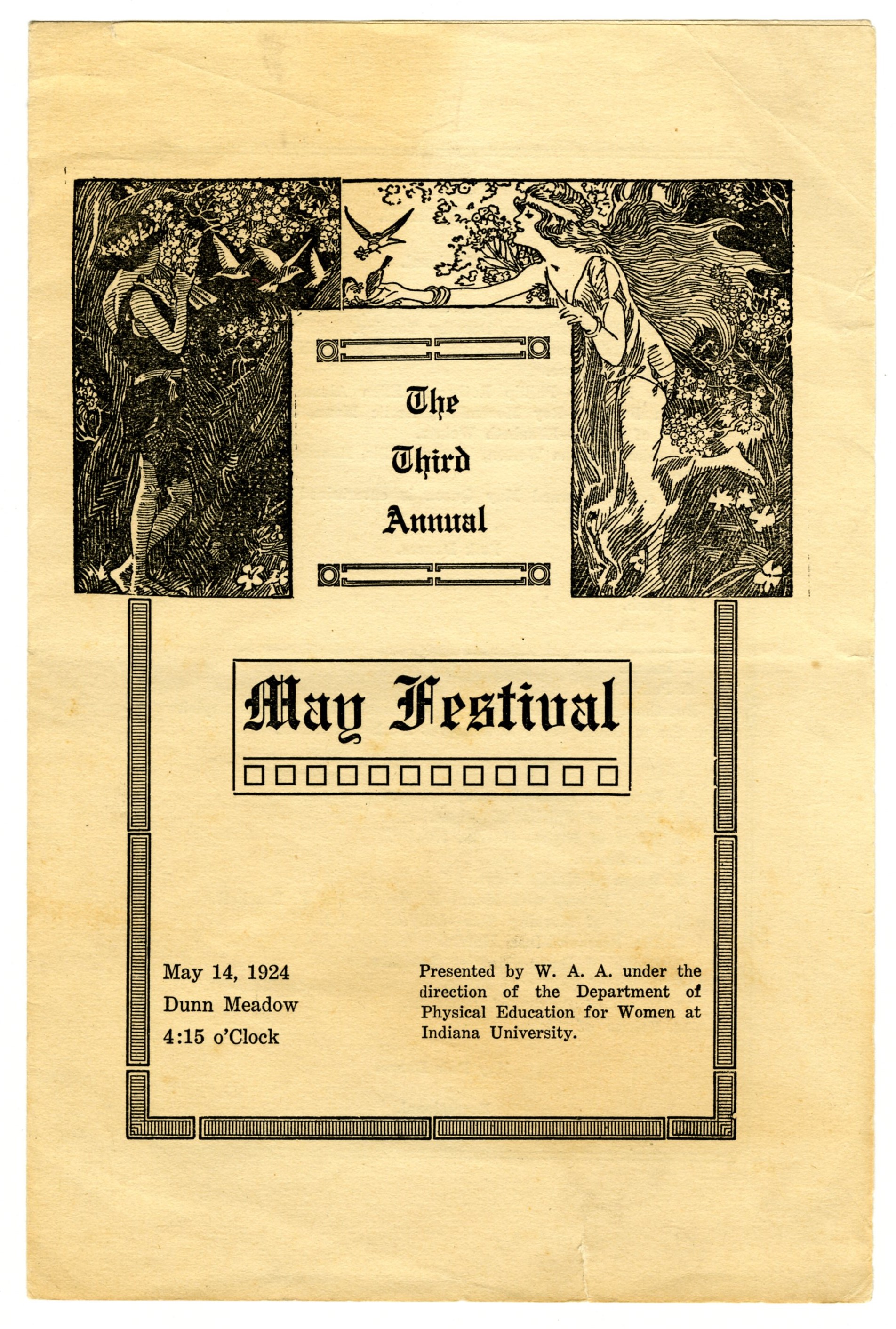 By the 1922 May Festival, the WAA and WSGA had moved proceedings to Dunn Meadow. Rather than an invitation-only event in the Women’s Gymnasium, the May Festival had turned into a public performance. This collection also includes a 25-cent ticket for “Sylvia” to attend the Dance Drama portion of the festival at Dunn Meadow in 1927. IDS articles from this time also list the delightful box lunches served to attendees (who could say no to shrimp and mayonnaise sandwiches?) at no cost. One reporter indicated that the WAA and WSGA prepared 800 of these lunches—enough for a huge crowd. The May Festival shows how women at IU transformed a small musical celebration into a popular event that highlighted their talents as athletes, dancers, singers, and artists.

It appears that the WAA and WSGA ceased sponsorship of the May Festival after the 1920s. The last program contained in this collection is from 1928. IU women, however, carried on celebrating the tradition into at least the 1940s, as documented in the IU women’s residence halls scrapbooks. Collection C631, which contains 82 such scrapbooks from 1925-1959, is open for research and offers images from these later unofficial celebrations. 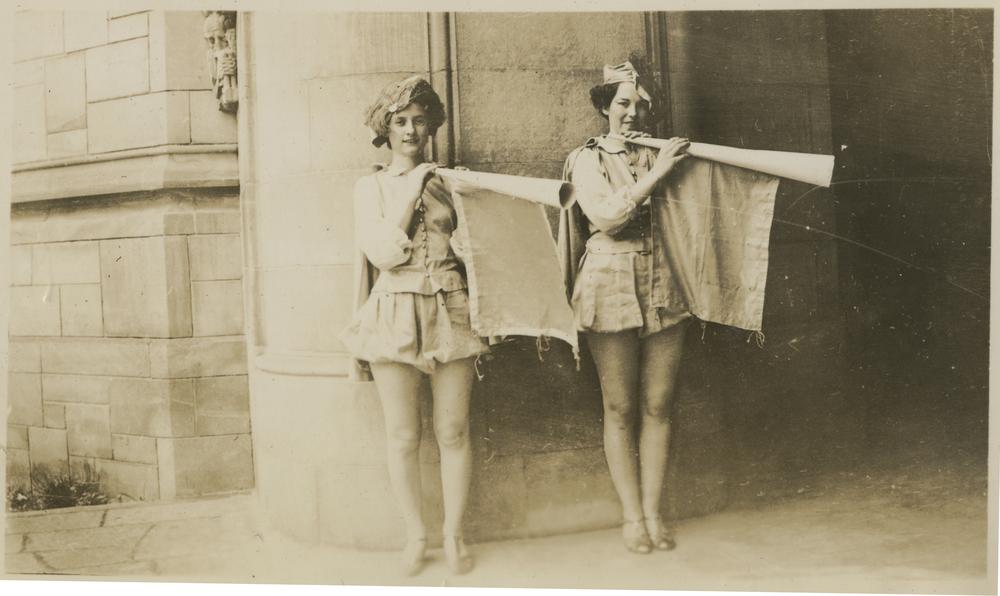 May Day Festival participants Betty Higbee and June Hiatt, 1937. This image scanned from “The Towers” (yearbook / scrapbook / photograph album) compiled by residents of East Memorial Hall when it was a dormitory. IU Archives image no. P0052722

To learn more about the May Festival collection or to view the collection yourself, please feel free to contact the University Archives to set up an appointment.

Students dancing at the May Festival in Dunn Meadow, circa 1930