Richard Wagner is an excellent case study in the failures of moral absolutism. The nineteenth-century German composer, thinker, and conductor did a lot of good things and a lot of bad things – and his actions have had a lasting legacy, even here at Indiana University. In preparation for the Jacobs School of Music’s upcoming production or Wagner’s opera Parsifal, I examined a number of items from three different libraries on campus: the William and Gayle Cook Music Library, the Lilly Library, and the Indiana University Archives. What I discovered are a series of objects that tell a fascinating, and complicated, story about Wagner, his music, and their connection to IU. 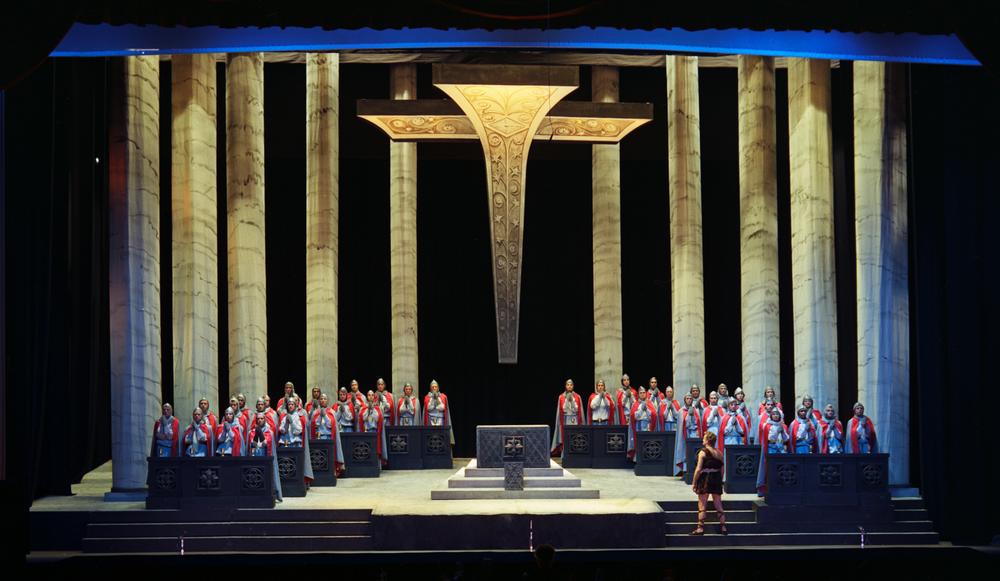 I went to the Lilly Library first. In 1850 Wagner published his now infamous essay under a pseudonym, and that essay was reissued with his true name in 1869. The Lilly’s copy of Das Judenthum in der Musik (“Jewishness in Music”) is a first edition and still lies within its original pale green wrappers. Perhaps it is all in my head, but the physical object seemed to project a wicked aura. Within it, Wagner expounds upon his notorious Anti-Semitic views, insisting that musicians of Jewish descent cannot possibly live up to the intrinsic creativity of German culture. He also denounces two well-known Jewish composers, Felix Mendelssohn and Wagner’s nemesis, Giacomo Meyerbeer. To this day, Meyerbeer’s reputation still hasn’t completely recovered from this defamation. Given this level of reprehensibility, I was ready to give up on Wagner. But I decided to look at another item – a first edition full score of Wagner’s Parsifal. 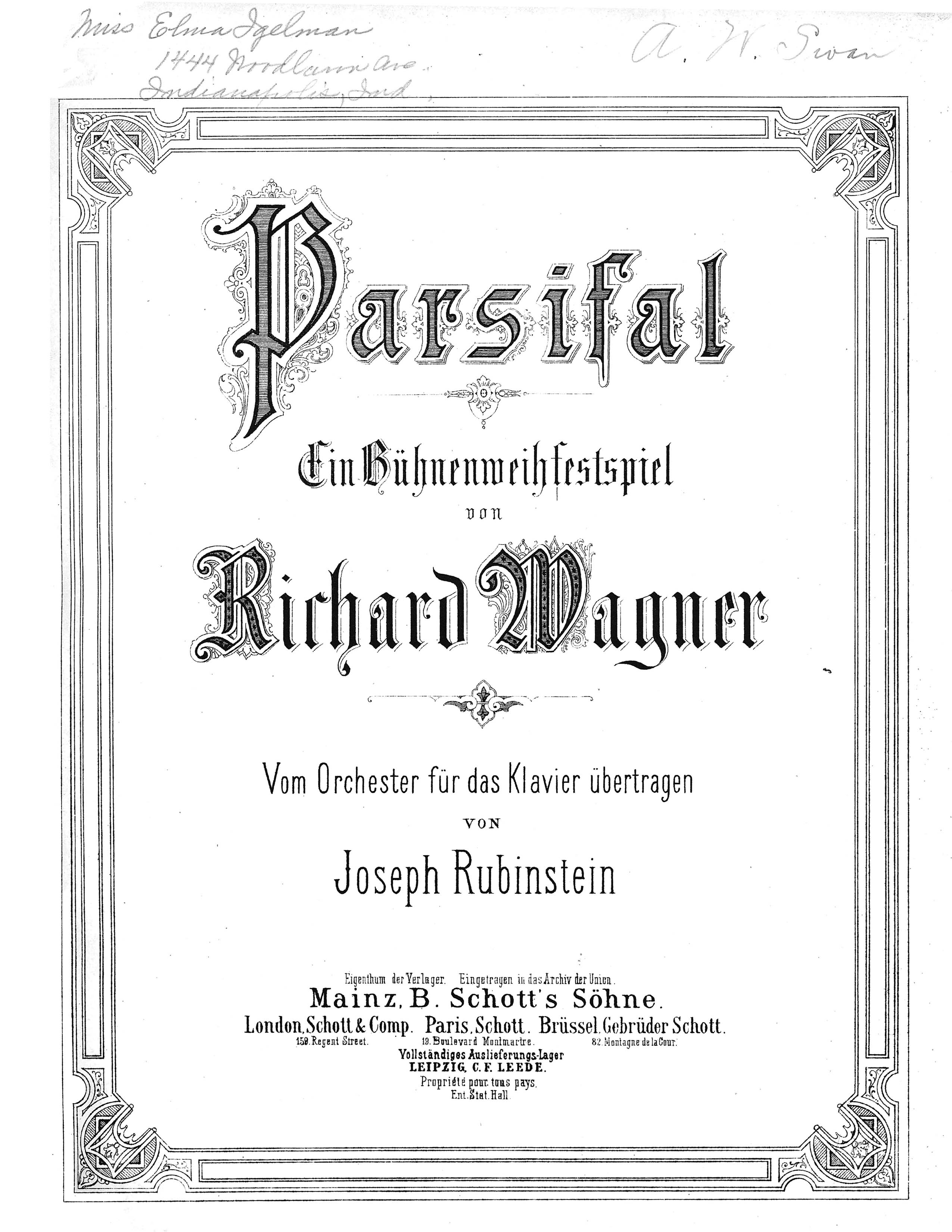 At the William and Gayle Cook Music Library, I examined an 1883 edition of the piano vocal score for Wagner’s Parsifal. The copy features an elaborate title page and marbled end papers. It is still possible to see the impressions where the nineteenth-century plates were pressed onto the paper. As exquisite as this score is, the music is even more beautiful. Wagner first conceived of Parsifal in 1857, but the work did not premiere until 1882, just a year prior to his death. Rather than referring to the work as an opera, Wagner called it ein Bühnenweihfestspiel or a “Festival Play for the Consecration of the Stage.” Parsifal premiered at Bayreuth Festspielhaus and was performed there exclusively until 1914. The work tells the story of the twelfth-century knight, Parsifal the “pure fool,” who in his youth witnesses the rite of the Holy Grail. The young man, filled with compassion, eventually overcomes the villain, Klingsor, in order to ultimately redeem the Knights of the Grail. Musically, Parsifal is a triumph. It contains some of the most powerful moments in opera.

In addition to the beautiful piano vocal score, I viewed another full score that belongs to the Lilly Library. This was a particularly special copy because it was previously owned by Fritz Busch, a great German conductor. Busch actually conducted another of Wagner’s operas at Bayreuth in 1924. The beauty of this particular score lies in the myriad colored pencil markings throughout, which outline Busch’s personal interpretation of the opera. Interestingly, Fritz Busch was forced out of his position with the Dresden State Opera in 1933, five weeks after Hitler came to power, because he opposed the Nazi regime and because he was perceived of as having too many Jewish friends and acquaintances.[1] 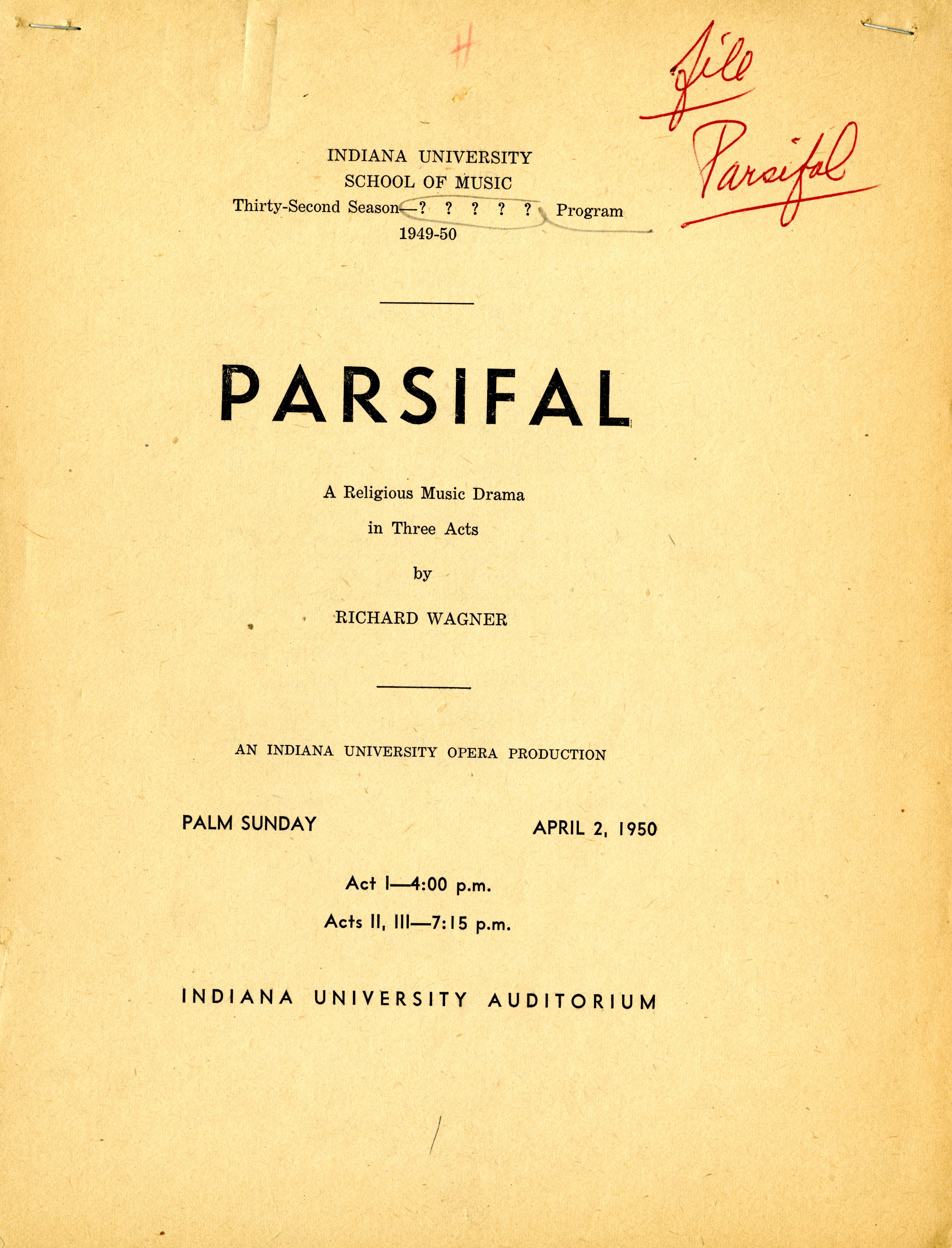 But how does all of this relate to Indiana University? What impact have Wagner and his works had here? At the IU Archives, I found hundreds of photographs, concert programs, publications, and correspondence regarding Parsifal at IU. Beginning in 1950, the IU School Music performed Wagner’s Parsifal annually to correspond with the Lenten season. Dean Wilfred C. Bain, and director of orchestral music, Ernst Hoffmann launched a combined effort to spearhead the first performance. The two men felt that the opera was especially fitting for the IU Opera Theater stage because it could showcase the school’s strong wind section, strong tradition of choral singing, and mature male singers. Many of these students came to the school of music later in life as the result of the GI Bill.[2] Several of the original lead vocalists including D. Ralph Appelman, Margaret Harshaw, and Roy Samuelsen stayed on as school of music faculty. Fritz Busch’s son, Hans Busch, joined them as the IU Opera Theater Director for a number of years.

IU’s Parsifal became the first IU School of Music concerts for which tickets were sold. Some of the performances even included a Parsifal Supper so that audience members could come together for a meal at the Indiana Memorial Union between Acts I and II of the multi-hour production. IU students often performed the opera in English because according to Bain, “the only way to make it popular with large American audiences was to present it in intelligible English translations.”[3] The production received worldwide attention and accolades with reviews published in Opera News. The final annual performance ran in 1969, and the tradition ceased in order to save money and resources and in order to give music students the opportunity to experience a greater variety of repertoire.

Nevertheless, the impact of Parsifal is still palpable. The Jacobs School of Music is one of the best schools of music in the world and one of the finest aspects of IU. Perhaps some piece of that is because of Parsifal, in spite of Wagner’s questionable morals. In honor of Indiana University’s bicentennial anniversary, this November the Jacobs School will present its first production of Parsifal in decades. The opera, directed by Chris Alexander and conducted by Arthur Fagen, will feature a cast of professional vocalists and music students. No doubt it will be in interesting addition to IU’s operatic legacy. If you don’t have tickets yet, it looks like there are still some available!

To find out more about the history of productions of Parsifal on the IU Bloomington campus, contact the IU Archives.