In 2015, Indiana University launched the system-wide Media Digitization and Preservation Initiative (MDPI), with the goal of reformatting and saving deteriorating media and film that could be found across all of the Indiana University campuses. To date, more than 344,000 audio, video, and film have been digitized.

At the University Archives, in some instances, we knew who deposited or transferred the media, but so many lacked description — and we lacked the proper equipment to safely play or view many of the items – that we are just now discovering what we actually had in our holdings. It has been a long road to figure out copyright and privacy issues surrounding the digitized media but late last year, we were given the green light to begin working our way through the “dark archive” and begin making them accessible. Access levels are worldwide, IU-login, or restricted. Nearly all materials can be viewed upon request for individual researchers, however, and item descriptions can be found via our collection finding aids in ArchivesOnline. For the past several months, I have shared internally what was being published but it seemed these updates should be shared more broadly! And so, without further ado….

All of these items can be accessed via Media Collections Online (MCO). Some may require IU log-in for immediate access; click on the Sign In link in the upper right hand corner of the MCO web site.

In April, Archives student Andrew wrote a post about his work on recordings from the Robert Byrnes papers, and specifically, a series of films Byrnes recorded circa 1959 on Russian history for distance education purposes. These films have since been processed through Kaltura for automatic transcription and now our wonderful graduate student Stephanie is working on cleanup. When completed, the files will be moved back into MCO and they will be our FIRST films with closed captioning! The transcripts are fairly clean but it is still slow work, taking her about 4-6 hours per 30 minute recording (she says she spends a fair amount of time looking up the spelling of Russian individuals and places!). 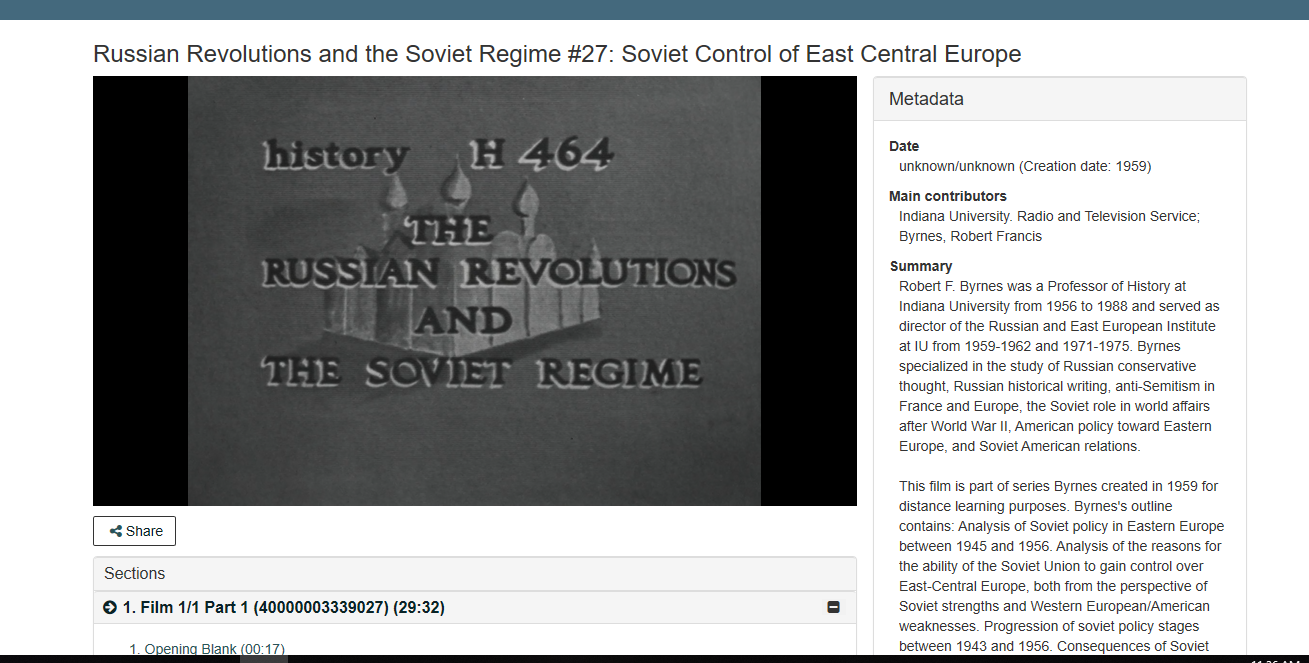 We have also located and pushed a few recordings in response to requests, all have Worldwide access:

Look for the next update in a few months!