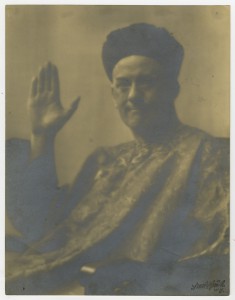 The late Victorian period was the time in which the modern world as we know it took shape. The industrial revolution was in full swing, scientific and technical discoveries were coming at dizzying pace, and the many scholarly disciplines that deal with the human cultures became recognizable in their modern forms: anthropology, archaeology, linguistics, and of course Egyptology, among others. But at the same period, particularly in Britain, there was also an explosion of interest in the occult, the paranormal, and the esoteric – interests that developed directly into what is now often described as “New Age” philosophy.

Ancient Egypt was one area in which modern scholarship and esotericism overlapped, and even converged. It is not often remembered today that in the late nineteenth and early twentieth centuries, a number of mainstream scholars of antiquity were interested in esoteric or occult subjects. One very interesting case is that of Battiscombe Gunn (1883-1950), still remembered as one of the most insightful Egyptologists of his generation. What is less well known is that Gunn was associated, apparently in more than a casual way, with Aleister Crowley. Crowley, of course, was and remains the most notorious British occultist of the late nineteenth and early twentieth centuries — an individual who was known to his detractors as the “wickedest man in the world,” and who proudly proclaimed himself to be the “Beast 666.” We will first lay out the evidence for the “friendship” – if that is what it was – between Gunn and Crowley. We will go on to discuss how and why Gunn, and a number of his scholarly contemporaries, were interested in the esoteric and the occult. And we will discuss the reasons why esotericism and mainstream Egyptology eventually went their separate ways.

Steve Vinson is an associate professor of Near Eastern Languages and Cultures at Indiana University in Bloomington, who earned his doctorate in Egyptology at the Johns Hopkins University in 1995. He is currently working on a book on historical and critical approaches to ancient Egyptian literature.