Miranda Wojciechowski is a PhD Candidate in the Department of English at Indiana University. She recently curated an online exhibition on Isabel de Giberne Sieveking, a project which began as part of Professor Christoph Irmscher’s course on “The Modern Archive,” taught at the Lilly Library in the Spring of 2017.

Isabel de Giberne Sieveking shines out as a fascinating figure buried beneath the remaining manuscript materials of her son, Lancelot Sieveking, a BBC radio announcer during WWII. Isabel emerges as a patchwork of compelling, and at times paradoxical, identities: a militant suffragette in a rural English village, a fervent public speaker and columnist for women’s rights and education, a historical biographer, an author and critic of literary fiction, an extensive traveler of English countryside and European continent alike, a rebellious but sweet Victorian child, an active correspondent devoted to female friendships, a Catholic wife, mother, and, at the very least, an object of passionate lesbian desire.

Like many archival recoveries, Isabel’s simultaneously vibrant presence amongst her rich collection of writings and her gaping absence in histories recorded elsewhere defies true recovery. Her obituary, and the occasional interview, in her local newspaper, The Hastings and St. Leonard’s Observer, gives us the brief outline of what comprises a historically lost life. She was born in 1857 to George and Maria Giberne and died in May 1936 after an apparently long and painful illness. As for the nearly seventy decades in between, she was to be remembered at once as a paradigm of devoutly religious motherhood and as an anti-marriage suffragette with a “casual attitude towards fire.” 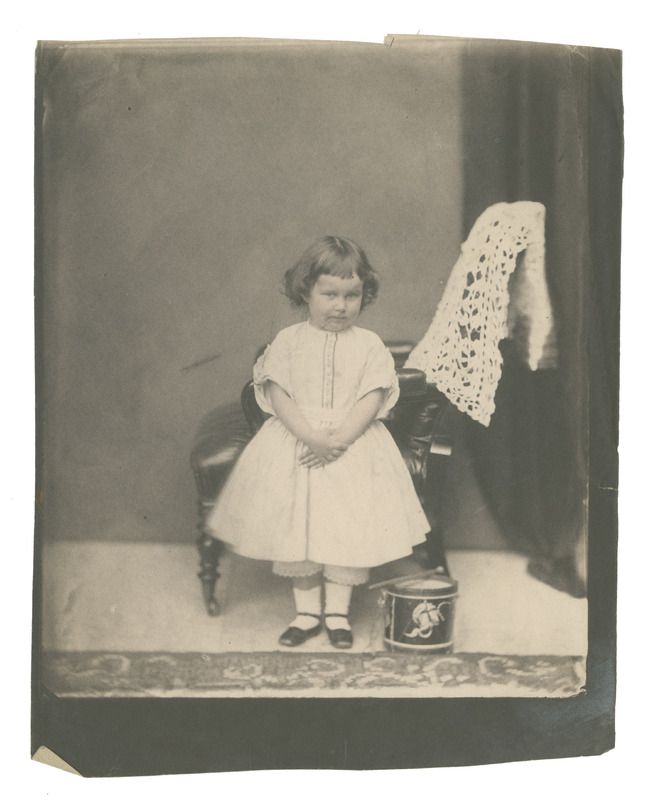 A devious looking Isabel Giberne. Around five years of age, the young Isabel is posed with hands demurely clasped in a domestic scene fringed with lace, while a martial toy drum lies to the side at her feet.

These paradoxical accounts of Isabel’s intertwined personal and political selves present a history of major social transformation beyond the coherently declared ideologies of their representative leaders and organizers. The archival reader, piecing together a lifetime of private and public writings, begins to construct a portrait of the political as an amalgam of ordinary lives of questions and contradictions lived out in their criticism and activism.

Isabel’s privately affectionate marriage and her strident anti-marriage crusading provide one such generative ambivalence. In 1891, a 33-year-old Isabel married the 25-year-old merchant, Edward Sieveking. While very little record of their relationship or even of Edward himself exists, the one letter in the collection penned by Isabel herself (and addressed to “dear Ted”) reveals a tender, albeit restrained, affection between the two.

Many more letters document her passionate friendships and relationships with women, including a series of romantic declarations from the nanny of her children, Gwendoline Edwards. Several such letters offer anecdotes about other women’s marital problems and raise broader questions about these issues through which it’s easy to hear early echoes of suffragette solutions. On July 3, 1902, for example, Gwendoline writes of a mutual acquaintances’ blunders:

[Miss Mole] told me a lot about Mrs. Goodwin- how the marriage had wrecked her happiness- and how she was fighting to get back to Miss Mole. . .Why do people rush into these things and regret it afterwards- I suppose Mrs. G thought like so many more, that it would be so much more than it is- Miss Mole told me too that she had refused several men because she had nothing like the love she had for Miss Bevis to offer to any of them.

From this bit of gossip regarding Mrs. Goodwin’s failed relationship with her new husband and her interrupted fulfilling one with Miss Mole, Gwendoline forms a simple questioning of a conventional given. Why sacrifice an intimate and fulfilling connection to an expected institution? This question comes up repeatedly in her other letters, as her family, unknowingly, urges her to give up her love for Isabel (and the freedom of her single state) for the financial and social security of a passionless marriage.

Connecting these personal questions to the lives of others, Gwendoline here performs the initial work of the suffragette movement on the ground in her private letters. She ruminates on the havoc wrecked by carefully cultivated female ignorance of martial realities and the equally carefully cultivated lack of companionship between the sexes nearly a decade before her correspondent and confidant, Isabel, attempts to resolve these issues in her political writings. In her article “The Celibate Englishwoman,” published in the July 12, 1913 issue of the suffragette magazine The Awakener, Isabel argues that marriage cannot satisfy women’s needs for close companionship. Converting commonplace issues in women’s lives to critical examination and proposed solutions, Isabel asserts that proper education was beginning to substitute women’s retrospective regrets with their informed and self-fulfilling choices, an “ignorance taken advantage of…innocence abused” with an “illimitable power” and the “practically boundless. . . horizons” of a “life [that]. . .can fulfill all [their] aspirations.” 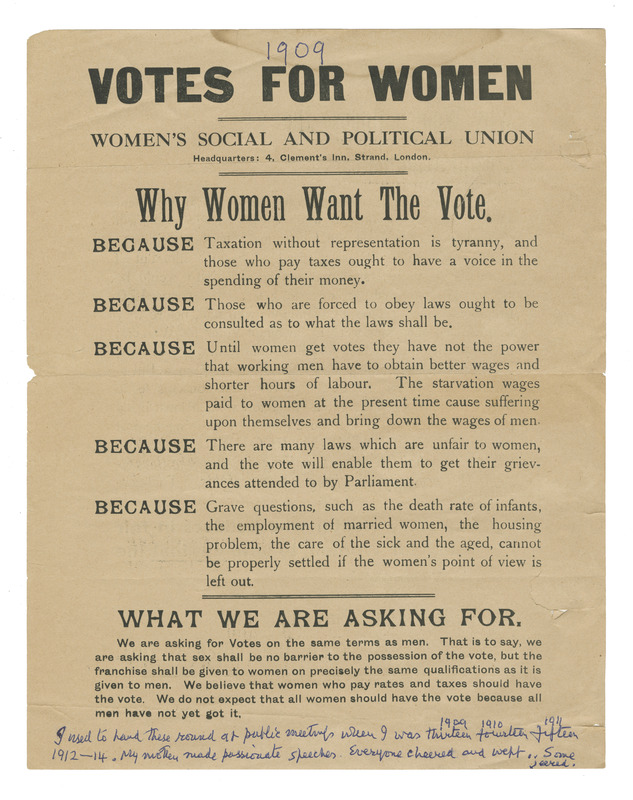 Through the mingling of journals, letters exchanged between friends and lovers, and suffragette tracts, the Sieveking collection intricately illustrates how ideas about gender played out in the everyday Victorian and Edwardian life and how the mundane routines and relationships of these daily lives impacted the platforms of early feminist movements. At the same time, reflections on Isabel’s “Life of Service” (The Hastings and St. Leonard’s Observer) within the collections illuminate the individual life as a site on which seamless narratives of socio-political movements break down. Isabel’s correspondence, from which her own voice remains largely absent, radically builds an archive of communal experiences from personal exchanges. Similarly, Isabel Sieveking’s activist writings challenge narratives of progressive movements as centralized in urban London. The work of Emmeline Pankhurst in Royal Albert’s Hall multiplies into that of participants of public meetings in Hollington, Ore Village, Mount Pleasant, and St. Leonard’s, a sprawling network rather than a single point of origin. Indeed, the work of this unknown individual illuminates the widespread existence of rural radicals, as well as national and international communities held together by a complex web of yearning questions, grievances, desires, and political investments.

The papers of Isabel de Giberne Sieveking can be requested through the Lilly Library Request System.