People write in books. Sometimes this is infuriating. Sometimes it is beautiful. Or hilarious. I have particularly enjoyed the deeply opinionated notations made by music students in instructional texts. Recently, I found someone had seemingly written all of her class notes on the end sheets of Henry the Fourth Part I. I love it when bored students have doodled in the margins of their textbooks.

But by far the most adorable thing I have found yet is this: 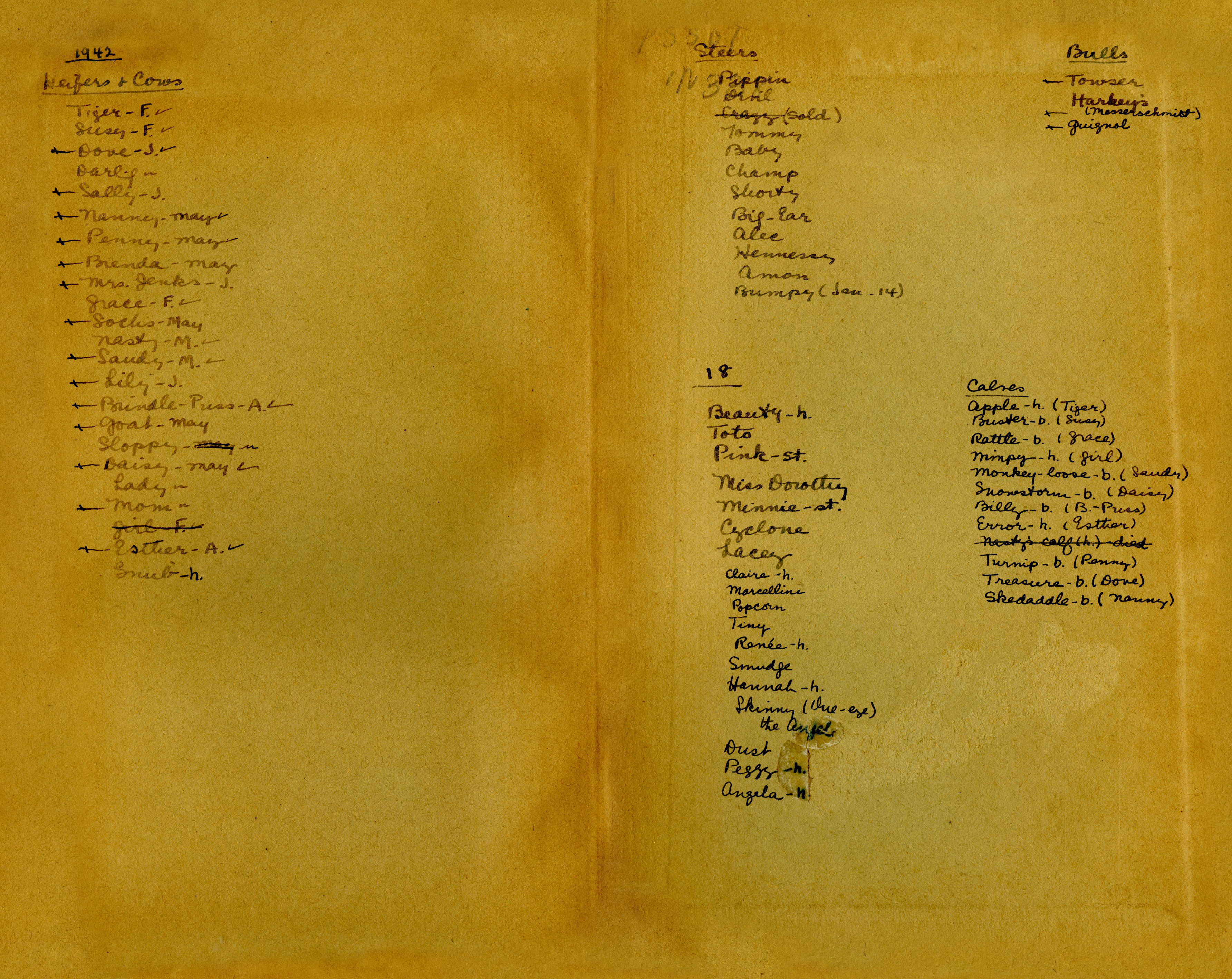 It was written on the back end sheets of a 1930’s collection of essays titled Americans Abroad. The book needed to be rebound to be useable, and the end sheets were so acidic and brittle, that in the end we made a scanned copy and tipped that into the new binding, just for the sake of interest.

I was so charmed by the whole thing that I sent copies of the scan to several friends. The best response was from my friend and former boss Professor Bob Eno:

“ I gather that your restoration project includes the first work by Henry Miller published between hard covers. I can’t help but wonder what he would have made of these cows, or what Mrs. Jenks would have made of him. I’m confident a cow so dignified would never have approved being listed alongside him in this way. I’d like to know what sort of beauty Miss Dorothy grew to be, and I can’t help but feel that it was unwise to saddle Nasty with such a name – her poor progeny probably died of shame. Really, I’m not sure a vanity book about expatriate Americans could possibly have the literary promise of these endpapers: Heifers and Cows of 1942: These Are Their Stories.”

Which made me think. Who are the cows in literature? I can really think of only a couple.
First, my dear childhood friend Ferdinand the Bull, from Munro Leaf’s The Story of Ferdinand, who gave me my first exposure to the idea of nonviolent resistance and the great importance of just sitting and smelling the flowers. 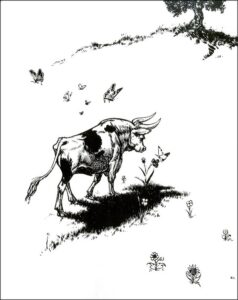 Illustration from The Story of Ferdinand by Munro Leaf. Illustrations by Robert Lawson

If the number of Ferdinand tattoos out there is any indication, lots and lots of other folks really love Ferdinand. Seriously. Do a quick Google image search of “Ferdinand tattoos”. I had no idea.

Personally, my very favorite fictional cow is the sweet-tempered unnamed cow in one of my very favorite books of all time – BJ Chute’s 1956 novel Greenwillow. This cow is made delightful by the enthusiasm that the other characters show for her. As when she is first brought home by the numerous and boisterous Briggs family:

They let the cow set her own pace, going home, and it was a slow journey but very eventful with Micah and Obadiah and Shadrach running in circles about her, Jabez discovering from the rear that a cow’s tail is not to be hung upon, and Sheby walking gravely by Gideon’s side and weaving a wreath of asters. It kept falling apart in her hands but, for such a cow, even Sheby could be patient.

And once they get her home:

There were five shouts from outside, chiming like bells. Someone cried, “Dorrie! Come quick, cow’s bedded,” and Dorrie ran to the door.

Micah was first and caught her hand, and flew her to she shed. “She’ll get up,” he panted, “if we don’t hurry,” and then they were all at the shed and he thrust her through the doorway ahead of him, and sure enough, cow was bedded.

The cow seemed very surprised about it and well she might, for it had taken the strength of all the Briggses to make her lie down and appreciate her new comfort. She was a passive cow but she was also used to keeping her own hours, and this daylight bedding was new to her. Still, the hands were gentle, and the hay smelled of clover and one place was very like another.

Greenwillow does not contain an illustration of this cow, but I have always imagined her looking a lot like this: 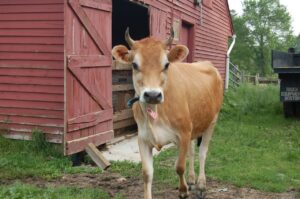 Ok – that’s only two cows. And I couldn’t think of any more.

So – off to Google. And it turns out that cows are shockingly underrepresented in literature.

Other than a handful of comic books and cartoons, there just aren’t many fictional cows outside of the realm of  mythology and religion.  There are deeply significant cows in  Greek and Egyptian mythology and of course, Hinduism.  I’m not a religious studies or art history expert, but the images are amazing.  I’m not even going to try to select any to post here.  I just recommend spending some time with the linked pictures.

Cows are of course, very well represented in dairy advertising: 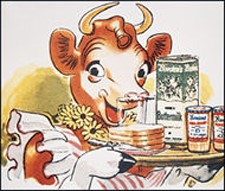 Elsie the Cow. Mascot of the Borden Dairy Company 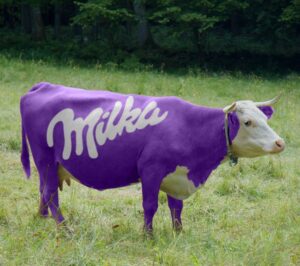 But I digress. I sort of intended to write about marginalia. There is of course a whole lot of debate about whether writing in books is blasphemous (How dare you insult the inherent  dignity of all books?!) or practical and historically significant. (How else do you keep track of your thoughts and the thoughts of others that read the book before you?)

Like most others of my generation, I was taught never, never to write in books. As a teenager I was furious when my little brother went through my copy of Winnie the Pooh and colored in all of the pictures of Piglet with orange marker and blue ballpoint. And long before my job was in preservation I thought it would be a good idea to remove the ink with bleach. I know better now.

And now I love it when a written-in book comes across my workbench. It makes me feel closer to the book to know that someone thought enough of it to comment on it. Or keep their list of cows on the back end sheets.

Often when I tell someone what I do for a living, they sheepishly admit that they write in their books and assume that I must hate them for it. Nope. No judgement. Write on! Well, maybe not in the library books. I didn’t  tell you to do that.  But I won’t be the one to erase it.

And I should mention the Book Traces project, which celebrates library books that are written in, or have odd bits and pieces left in them.

Anyway, I’m sure I missed some important fictional cows. What can anyone out there recommend in the way of cow-related reading? Winter is coming and I want to curl up in a chair with a cup of tea and a book and maybe spend some time contemplating my cow neighbors. 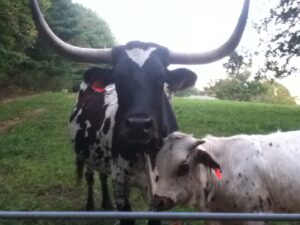 And I will smugly point out to my urban Texan relations, that I may live in Indiana, but I am the only one in the family with Longhorns right next door.